The Key to a Good Grip

The first way we engage with a fly rod is by holding it, so I like to teach grips first before moving on to stances and the different movements of the rod throughout the cast. Some grips are, of course, more suited to particular casting requirements than others, and I usually go through the different situations and options early on in a lesson with intermediate to advanced-ability casters. With beginners, however, I prefer not to overload them with too much information at an early stage and (unless the client is physically incapable of adopting it) tend to let one grip suffice – for their first few sessions, at least. 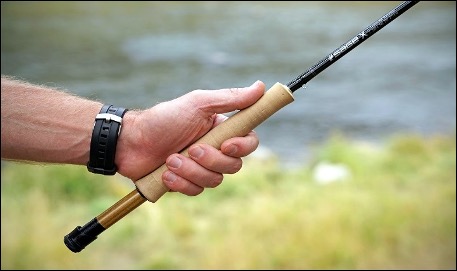 The Thumb on Top Grip

When used in conjunction with ‘good practise’ throughout the back and forward casting strokes, I’ve seen more improvement with one particular grip – a modified version of the standard ‘thumb on top’ grip shown below – than any other, by both newcomers and more experienced casters alike. Not only is it straightforward enough for me to explain and demonstrate, and for the client to imitate and practise (therefore transferable), but it also provides everything that’s required from a grip and helps the caster set up and deliver both overhead and anchored casts more efficiently.

This is, perhaps, the most commonly adopted grip and is here demonstrated on a modified full-wells rod handle. The firm ‘heel’ of the palm is secured in the lower wells, the fleshier part of the palm rests on top of the handle with the pad of the thumb in the upper wells (or on the cigar-shaped top of a reverse half-wells handle), and the fingers curl around to rest against each other and snug the central, slightly-bulbous part of the handle into the palm.

A good way of teaching this grip would be to have the client imagine they’re picking up a briefcase or suitcase, as this is how the handles of both are often held. The fly line, meanwhile, is kept under control by being trapped against the underside of the rod handle. This can be done with the index finger, first two fingers or second finger alone, and whilst there are pros and cons to each of these, the caster should choose the option they find most comfortable. 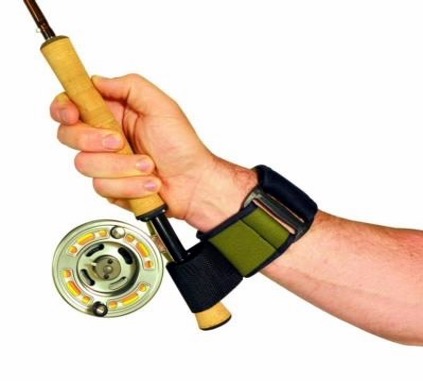 One of several wristlocks on the market: a temporary solution at best

Six advantages against three disadvantages confirm the practicality of the thumb on top grip in many respects. The problems, however, are highly significant, and whilst there are ways around them (such as using a wristlock, or squeezing the fingers on the back-cast stop, to prevent too much wrist break), they work by adding things that many casters find either an encumbrance or yet another action to remember on top of everything else.

Wristlocks, for example, might physically prevent the caster from excessive wrist break, but in my experience they don’t correct the muscle memory that causes it in the first place. On the few occasions when I and clients have experimented with them, the problem has tended to return either immediately or soon after they’re removed.

Squeezing the fingers on the stop also makes excessive wrist break difficult and does away with the encumbrance of a wristlock; however many beginners and even more experienced casters can find this hard to achieve because they’re already holding the rod handle far too tightly. Even if they can do it, they may forget to relax the grip again after the stop. With one simple modification, however, the caster can go a long way towards minimising the thumb on top grip’s disadvantages whilst retaining and enhancing its advantages. 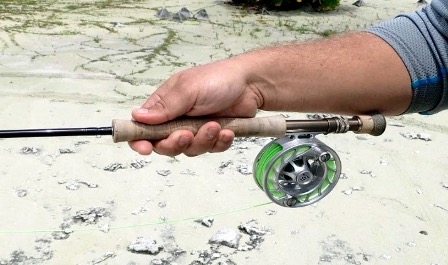 There’s nothing new in this grip, advocated by (among others) the late, great American instructor, writer and presenter Mel Krieger. Back ‘across the pond’ I’ve watched some of our own instructors like Glyn Freeman, Clive Mitchelhill and Brian Towers use it to great effect. It’s formed simply by adopting the thumb on top grip and then moving the pad of the index finger forwards so it rests directly underneath the thumb pad – much as you’d hold a key or screwdriver when turning it.

This can, admittedly, feel a little unusual at first (it certainly did when I first tried it); however, like many other physical adjustments made in sport, it becomes more comfortable and ‘second nature’ with practise. The arrangement of hand muscles in this grip makes it noticeably harder to hold the handle too tightly and break the wrist excessively during the back cast. With the bottom three fingers together, rather than all four, there’s less chance of lifting too quickly and powerfully into the back cast – especially if the caster is encouraged to lift by feeling the pressure of the rod handle more against the index finger pad than the bottom three fingers. 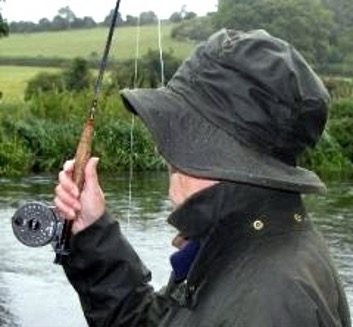 All the advantages of the thumb on top grip, meanwhile, are retained by the extended finger/key/screwdriver grip – with one significant addition in the form of the index fingernail as a directional aid on both the back and forward casting strokes. The thumb is often spoken of as the main determinant of the direction in which the rod tip and line travels; however by ensuring that the pad of the index finger remains on the underside of the handle throughout the back cast, and that the index fingernail ends up opposite the target on the stop (and not pointing upwards as a result of excessive wrist break), this also will assist the creation of a good, straight-line tip path.

When combined with a smooth acceleration to a positive stop, the end result is that narrow, slack-free and efficient loop that we usually encourage our clients to strive for. Equally, by aiming the index fingernail towards the target area throughout the forward stroke, with the rod only rotating to cause loop formation on the stop, a similar result should be seen here, too. Many of my clients have found that this simple modification of the thumb on top grip makes a significant difference to their casting – particularly when they realise that, through using the index fingernail in this way, it has more to recommend it than they initially realise.