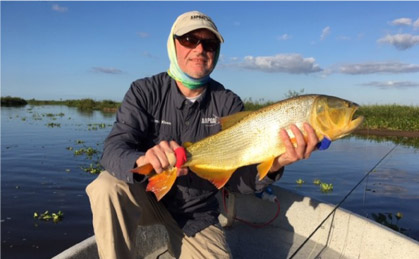 Back in 2017 I was in Argentina for the first time to fish on the famous Rio Grande River for sea trout. As the night flight arrives in Buenos Aires at around 0800, most people stay one night in BA in order to fly further to Rio Grande or Rio Gallegos the next day. That’s what we did on the first trip, but contrary to the sightseeing that most people do during the day we decided to go Dorado fishing straight away upon arrival!

As the trip in 2017 was pretty successful I decided to guide another party in 2019. Unfortunately I had made the decision before AAPGAI members had been offered a week’s fishing on the Rio Gallegos by our fellow member, Paul Becher; otherwise I would have been there!

The local flight company, Aerolinas Argentinas, had decided to change the flight schedule to Rio Grande and the departure was shifted from 1500 to 2345pm! We therefore decided to go Dorado fishing again during the day and then to be dropped off at the local airport in the evening. After all, what else could we do?!

On the first trip a friend had recommended Pablo Mazza, who operates Flyfishing & Hunting out of Buenos Aires. Pablo is a nice chap who offers a very reliable service so I booked him again. After 1 ½ nervous hours at passport control the taxi brought us to the small town of San Pedro, which lies on the banks of the mighty Parana river, some 2 ½ hours north of Buenos Aires. Pablo and his guides were waiting for us with three boats and after tackling up we headed into the Delta, which takes another 45 minutes.

The Delta consists of numerous channels and lagoons – so many that, on your own, you may never find your way back! The fish usually hold along the edges of the channels where the water runs faster. Large Streamers, mostly Andino Deceivers, are presented on short belly WF floating lines as close as possible to the bank. Usually single hand rods of 9ft, rated for #6, #7 or #8 lines are used, together with an appropriate reel; however I found using a switch rod to be quite comfortable, especially when targeting islands on the main rivers. Leaders are rather short at around 5ft, plus 1 meter of mono with a lead wire tip, as the Dorado’s teeth are razor sharp. A second setup can be used for surface fishing with a floating popper and it is great to catch them on this.

On average one will catch 6-8 fish per day. The average weight is about 2lbs, but much bigger ones are possible. I did pretty well with a 6lbs fish and another member of my party (the worst caster!) had a 10-pounder. Depending on what time you start in the morning a lunch is offered, along with plenty of drinks. If you start early there is even time for a nice Asado (as the barbecue is called in Argentina), with plenty of Malbec red wine if you like.

So everyone who is going to fish for sea trout in Argentina should consider this option. Pablo Mazza is also offering tours for trophy-size Dorados, but you will have to travel about 1000km further north and should opt for at least two or (even better) three days. For further information visit Pablo’s website: www.flyfishingandhunting.com

Not long after my return from Argentina I headed to Munich for the show ‘Erlebniswelt Fliegenfischen’ (Experience the World of Flyfishing). The EWF is regarded as the best fly fishing show on the continent, with over 4000 visitors attending over two days. In addition to around 100 trade stands, a comprehensive program of lectures, fly tying, and casting demos are all offered. For the first time I had been asked to give a presentation and I decided to showcase the use of Spey lines, as at least 95% of fly fishers on the continent are using shooting heads for their salmon fishing. The presentation was well received and quite a few people asked for further information afterwards. Many asked about AAPGAI, so it was good promotion for us, too! Unfortunately I could only demonstrate on the Saturday, as on the following day I was off for my annual spring salmon fishing week in Scotland. But that’s another story…!